How does Trump win?

We have a good model. The Brexit (British exit) vote in Britain was a squeaker. A slight majority voted to exit the EU. The next day huge numbers had voters remorse. There never was a plan for the “day after.”   “I really didn’t know what I was voting for.”

Similarly, all those who think Trump will “shake things up” have no plan for “the day after.”  He has no experience.  There is no well conceived plan.

Any person applying for a position to any of his “companies” would have been easily shown the door. You have no experience. Why even bother wasting my time?

He is a con man. He is a sociopath He Is the penultimate liar. The liar-in-chief. Trump is channeling PT Barnum – there is sucker born every minute. He imitates Benito Mussolini – chin thrust forward with pouty lips. Trump is a modern counterpart to Italy’s Berlusconi. The nave prime minister that is unimpeachable. The Republican convention was a replay of 1968 next classic playbook. Law and order. The silent majority.  No one is listening to you white people.  The southern white strategy.

Is that a successful businessman? Yes, if your idea is to “short” everyone.

His mentor was Roy Cohn, the infamous Sen. Joseph McCarthys chief counsel.  His whole empire is built on lying and cheating little people.

The Trump University trial has been delayed to November. That gives him sufficient breathing room. It will be shown what a con man he has been. How he cons people out of thousands of dollars.  The Trump zombies won’t care.

You should watch the classic 1956 movie, The Invasion of the Body Snatchers. In the middle of the night the body snatchers steal your brain and replace it with a zombie brain.  That is the Trump voter. An army of zombies.

Or read the classic text from the 1960’s, The Politics of Cultural Despair by Fritz Stern. A study of the German mind that led to Hitler’s rise. Remember, Hitler was elected. He did not simply take over. The underground cult classic of the 1960’s was Wilhelm Reich’s Mass Psychology of Fascism.

So why do the Trump zombies not care?  We have become a nation of believers and not thinkers. Critical thought is not being taught. It is not emphasized. Go with the crowd. Entertain me. Roman circus. Trajan knew very well that Roman Circus would divert his subjects attention.  The greatest show on earth. 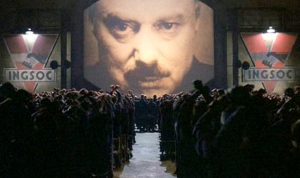 Images from the Republican convention remind me of 1984. A huge picture of Trump reminiscent of “big brother is watching.” Other images recall Nixon’s double victory salute. And the usual chin forward Mussolini pose. I wonder if these are accidental or whether Trump actually has studied all these great dictators in the past?

Finally, stop with the asymmetrical arguments! “well she lies too.” She is Bush league. There just is no comparison.  Has she told some lies?  Yes. But there simply is no comparing peas to watermelons. There is no comparison.  It’s enough. It reminds me of a quote (attribute long lost)

journalists don’t know the difference between the fall of an Empire and a man who falls off a bicycle.

What if the ultimate catastrophe was to happen? Trump was elected. He will never serve four years. This will not end well. Remember Nixon? Remember Agnew? And other great catastrophes in American political life.

Soon enough will people will be saying, “geez, it was so much better with Obama.”  How could the Democrats possibly lose this year?  By being un-inspirational.  Boring. People are looking for a new vision. A new message.

3 thoughts on “Trumpism: Could It Happen Here?”