The electoral college has not voted. Trump has not been elected!  He lost the popular vote.  By 2.6 millions votes.  Never forget this. He has won nothing yet. And already he is causing world wide instability.  You are not President Mr. Trump. So shut up.

The Electoral college is our last hope.   Preventing the legitimacy of a demogogue.   This has never happened.  We have been close.  Huey Long — The KingFish. George Wallace.  History had a way of preventing dangerous men from reaching this high office. This is not normal! The goalposts move every 5 days.

The electoral college was carefully crafted by Alexander Hamilton.  A grand compromise. Hamilton could never be president himself because he was foreign born. 18th century America was rural.   He wanted to prevent the rise of the demogogue.  They were only too familair with George III.  America was founded by brilliant educated, well-read, thoughtful men.  Men of the Scottish enlightenment.  Men with vision.  Compromises with rural vs metropolitain voters haunt us today.  Small states vs large states.  Haunt us today.  The issues that caused the Civil War still haunt us today. We are still fighting the civil war.

America is ‘an idea.’ That’s how we see you around the world, as one of the greatest ideas in human history 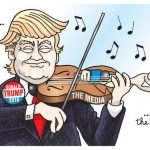 Trump is not qualified.  Never held any public office.  He has no acountability. He has never released his tax records which should be mandated by law.  He is elevating nepotism to absurd heights.   It is illegal. Who is left to challenge him?   The checks and balances of our brilliant founders is floundering.  Shredded. His most trusted advisors are his kids. And then there is Steve Bannon. You have already forgotten him. He is the master flame thrower.

Trump is an anti-intellectual.  He is illiterate.  He is a man of the new age.  The Twitter King.  The press has failed us. Howard Dean and then Barak Obama understood and mastered the power of the internet.  Trump understands the power of 140 characters — Twitter.  Simple utterances.  No well crafted prose. No arguements. Just simple dumb founded utterances.  Tag lines, epithets and dog whistles.

The Medium is the Message

The medium is the message. Marshall Mcluhan.  Neil Postman has elaborated further.  Read Amusing Ourselves to Death: Public Discourse in the Age of Show Business. John Cleese turned me on to Neil Postman. John Cleese of Monty Python fame. Cleese is heir apparent to George Carlin. Watch this video.

Huxley and Orwell did not prophesy the same things. Orwell warns that we will be overcome by an externally imposed oppression. But in Huxley’s vision, no Big Brother is required to deprive people of their autonomy, maturity and history.

Huxley feared we would be drowned in a sea of irrelevance.

— Neil Postman, Amusing Ourselves to Death

Where is the loyal opposition? The Democrats?  Don’t bet on it.  A feckless group of wimps.   They understand nothing.   Messaging.  Branding.  Simple declarative statements. Structural and institutional manipulatiuons.  Voter suppression.  Gerrymandering.  Dominating airspace and all conversati0ns. Bimbo spokespersons. The Republicans have mastered all of that in their most pernicious and vitriolic way.  In their insatiable thirst for dominating power.

The dark forces are winning.  The light is losing.  Who cares?  They go low — we go high.  Maybe SNL was right.  They go low, we get high.  Party on Dude.  Just entertain me. More Roman Circus. Now we have our Caligula. Popovich was right. We are Rome. Truth is the enemy of the State.

It is “desirable,” Alexander Hamilton wrote in Federalist 68, “that the sense of the people should operate in the choice of” president. But is “equally desirable, that the immediate election should be made by men most capable of analyzing the qualities adapted to the station.” These “men”—the electors––would be “most likely to possess the information and discernment requisite to such complicated investigations.” And because of their discernment—because they possessed wisdom that the people as a whole might not—“the office of President will never fall to the lot of any man who is not in an eminent degree endowed with the requisite qualifications.”

As Michael Signer explains, the framers were particularly afraid of the people choosing a demagogue. The electors, Hamilton believed, would prevent someone with “talents for low intrigue, and the little arts of popularity” from becoming president. And they would combat “the desire in foreign powers to gain an improper ascendant in our councils.” They would prevent America’s adversaries from meddling in its elections. The founders created the Electoral College, in other words, in part to prevent the election of someone like Donald Trump.

— Peter Beinart of the Atlantic

You Have Been Warned

Back to the Future was a premonition.  Bob Gale, the screen writer, purposely cast Trump as Biff.  It was not by accident.  Even DC Comics foretold of demagogues taking power in America in the 1970’s.

“If you tell a lie big enough and keep repeating it, people will eventually come to believe it. The lie can be maintained only for such time as the State can shield the people from the political, economic and/or military consequences of the lie. It thus becomes vitally important for the State to use all of its powers to repress dissent, for the truth is the mortal enemy of the lie, and thus by extension, the truth is the greatest enemy of the State.”